From Warner to MSO, A Palace Fit for Movies and Orchestra


The Milwaukee Symphony Orchestra (MSO) has moved into their new home, the former Warner Theatre, which has been renamed the Bradley Symphony Center. In-person tours and music have been scheduled as part of Doors Open Milwaukee on Sunday, September 26. A three-day grand opening will be held the weekend of October 1-3, 2021.

The Warner was one of eight movie theaters lining W. Wisconsin Ave. from the Milwaukee River to 6th St. Also lighting up the “Ave.” with vertical signs for a night at the movies were the Riverside, Majestic, Garden, Alhambra, Palace, Strand and Wisconsin theaters. They showed movies on a first run before moving to second and later runs in the “nabes.”

The most striking of Milwaukee’s early cinemas was the Butterfly with its 27' wide wings hovering above the sidewalk. It was cavernous when it opened in 1911, but its 1,500-seating capacity was too small to compete with newer and larger palaces on the “Ave.” and was downgraded to showing movies on a second run during the Roaring Twenties.

Fox (20th Century-Fox), profiting from its Movietone sound system, became the fourth-largest studio and bought Wisconsin's largest movie theater chain in the 1920s, Saxe. RKO operated the Majestic, Palace and Riverside vaudeville-movie theaters. Universal operated the Alhambra and several neighborhood theaters, including the large atmospheric Egyptian and Venetian palaces, evoking the atmosphere of places that at the time could only be reached by ocean liners. In 1930, Warner Bros. bought the operating leases of Universal’s Milwaukee neighborhood theaters.

L. K. Brin’s 1,250 seat Garden Theater was Milwaukee’s first theater to be wired for sound in 1927 and showed a lot of Warner Bros. talkies. Hit movies would run longer than one week before moving to the “nabes.” After Warner Bros.’ smash musical Gold Diggers of Broadway ran for an unusually long eight-week first run at the Garden in fall 1929, plans were unveiled to build a new movie theater as part of a 12-story office building that would replace the obsolete Butterfly.

Warner Bros. poured $2.5 million ($1 million more than Saxe spent on the Oriental Theatre) and hired the famed theater architectural firm, Rapp & Rapp to design and build a grand 2,431 seat palace with a Kimball organ. The towering lobby was Art Deco, while the auditorium conjured French baroque that King Louis IV, the "Sun King," would have recognized.

In early November 1931, Warner’s top star of the decade, James Cagney, appeared onstage for a week. He reminisced about when he and his wife Frances “Billie” Vernon had a comedy-and-dance vaudeville act, “Vernon and Nye,” on the Orpheum Circuit and played at the Majestic Theatre for a week across the street from the Butterfly in 1924. Casablanca opened for a three-week first run in early 1943 before moving to a second run on the Warner circuit in the “nabes,” which included the Oriental during the 1940s. 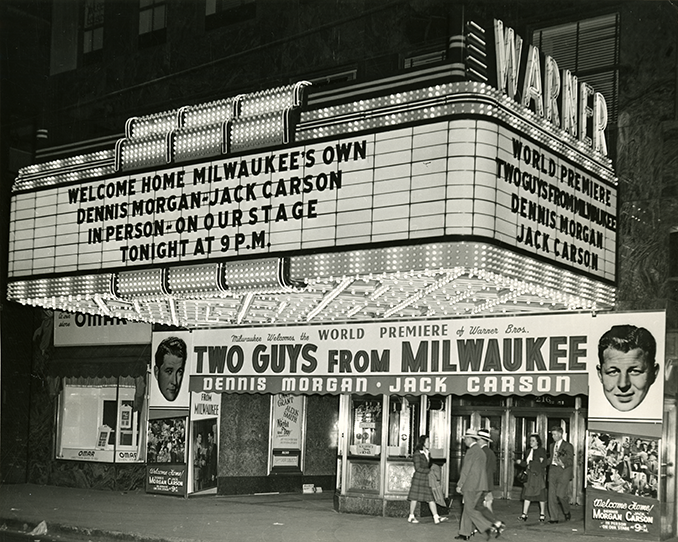 Two Guys From Milwaukee, starring one-time Milwaukeeans Jack Carson and Dennis Morgan, had its world premiere at the Warner on July 25, 1946. The stars promoted the movie at Centurama, a month-long celebration of Milwaukee’s centennial, rode in a motorcade down the “Ave.” before a crowd of 100,000, were mobbed by autograph-seeking bobbysoxers, and appeared at the Warner before the start of their movie. 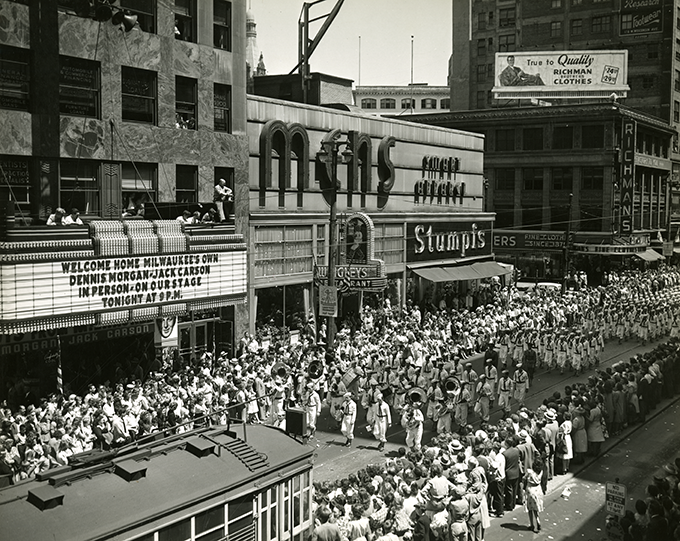 In 1948, the Supreme Court ruled in what became known as the Paramount Decrees that movie studios and theaters could not be owned by the same company (which was reversed last year). Warner Bros. theaters were spun off as the Stanley-Warner theater chain by the early-1950s. Marcus Theaters bought the operating lease of the Warner in 1966, removed the 51'9" Warner vertical sign, and renamed it the Centre Theatre. 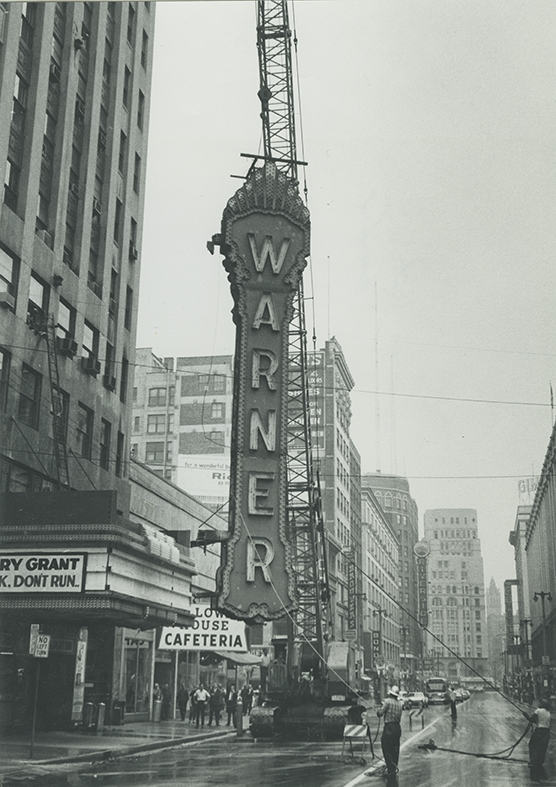 By the 1970s, movies opening for a first run only at Downtown theaters were part of the past. One by one, Downtown theaters closed or switched to live performances. To keep the Centre viable, Marcus split it into two theaters in a unique way. Rather than build a wall down the middle, they built a partition between the auditorium and balcony in 1973. The Kimball organ was removed, which eventually found a home at the Oriental until 2018.

Marcus renamed the Centre as Grand Cinemas shortly before the Grand Avenue shopping center opened in 1982. Finally, Marcus gave up the ghost and the Grand closed on June 11, 1995 after showing Tales from the Hood and Johnny Mnemonic. 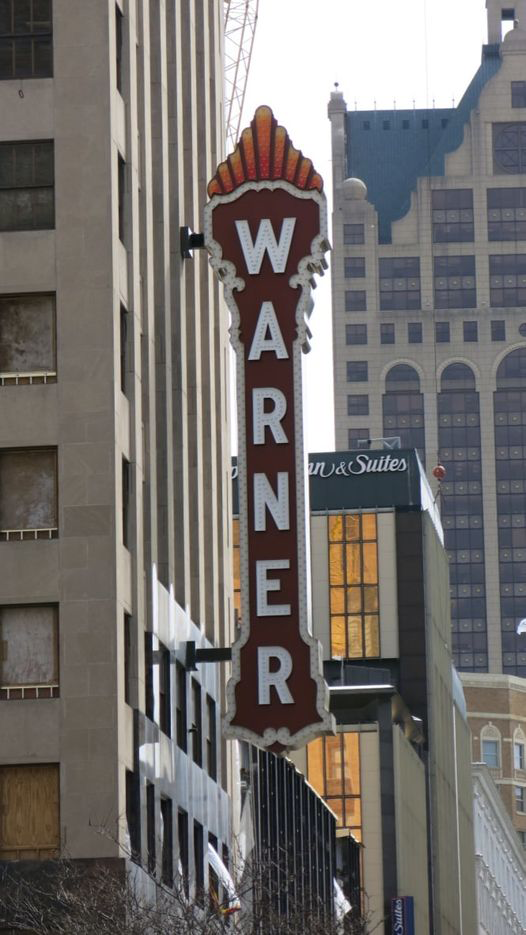 Marcus removed the partition dividing the auditorium and balcony, and invited the Milwaukee Symphony Orchestra to test the acoustics in 2000. MSO purchased the Warner Building in 2017. They moved the 630-ton backstage wall 35' east onto N. 2nd St. for a larger orchestra stage. A replica of the original Warner vertical "blade" sign was installed on May 9th, 2020, followed by the marquee replica sign.

If Humphrey Bogart could see the Milwaukee Symphony Orchestra reopening the Warner Theatre as the Bradley Symphony Center, he probably would say "Here's looking at you, kid."