The three-day strike by Milwaukee County Transit System (MCTS) bus drivers ended on Saturday, pending future contract negotiations. It was a lot more peaceful than the violent 1934 strike against The Milwaukee Electric Railway & Light Company. TMER&L (predecessor of We Energies and MCTS) was an unpopular monopoly for decades after raising utility rates, streetcar fares and once suspected of bribing elected officials. It was a subsidiary of the North American Company, a utility empire that owned utility and transit operations in St. Louis, Washington D.C. and other cities. It was originally controlled by robber baron Henry Villard (W. Villard Ave. is named after him). 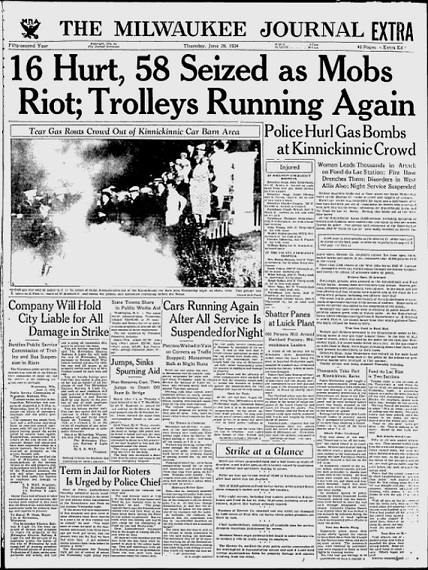 Ridership fell as unemployment skyrocketed to more than 40% in Milwaukee during the Great Depression, but TM still carried more than 110 million revenue riders (MCTS had 36,451,283 revenue riders in 2013). It cut the wages of streetcar and Rapid Transit interurban (light rail) carmen (motormen and conductors), bus drivers and mechanics by 10% in 1932.

Many transit and utility workers believed the Employes’ Mutual Benefit Association (EMBA), a company union, was too close to management and didn’t advocate enough for restoring wage cuts. The American Federation of Labor (AFL) started organizing TMER&L workers in 1933. Company president S.B. Way fired eight workers for recruiting coworkers for the independent union and refused to negotiate, even after the EMBA company union asked him to rehire the fired workers.

The AFL called for a strike on June 26th, 1934. It started slowly with only some carmen picketing in the rain, but close to 5,000 union sympathizers, many of whom were jobless young men during the Depression, joined them in the evening and blocked streetcars at the Kinnickinnic carbarn. 12 were injured and 17 were arrested.
It rapidly escalated on the second night, June 27th, as 24,000 union members and sympathizers rioted at the carbarns: 12,000 at Kinnickinnic, 10,000 at Fond du Lac and 2,000 at West Allis, shutting down car lines and bus routes with 16 persons injured and 58 arrested.

The third night, June 28th, boiled over when 30,000 people laid siege to TMER&L. Not only did 10,000, 8,000 and 6,000 besieged the Fond du Lac, West Allis and Kinnickinnic carbarns, respectively, but more than 5,000 tried storming the Lakeside power plant in unincorporated St. Francis in the Town of Lake. One protester was electrocuted, 16 were injured and 22 were arrested. A power line was dynamited and fell on the Rapid Transit tracks to East Troy at Vernon Center.

June 29th dawned with word that the Lakeside power plant workers would walk out in the evening, threatening to plunge southeastern Wisconsin into darkness from Kenosha to Port Washington. The Federated Trades Council called for a general strike in support of TM strikers on July 2nd.

Caught between a rock and a hard place with 1 dead, 50 injured (including 7 police patrolmen and detectives) and 97 arrested, Way met with union officials and mediators. Father Francis J. Haas, a mediator, warned "We must settle this strike before darkness." Way looked at the union demands in two minutes and reluctantly said "I agree to practically everything here."

Motormen, conductors  and drivers returned to work on June 30th, received a 5½-7% wage increase and fired union members were reinstated. The long-term impact might have hastened TMER&L's decision to convert car lines to driver-only trolleybuses and gas buses, and shortened and sell Rapid Transit lines, which were eventually abandoned, despite being positioned for post-war suburban and collar counties growth.