The grand re-opening of America's Black Holocaust Museum (ABHM) on February 25, 2022, coincides with the birthday anniversary Dr. James Cameron, who founded ABHM in 1988. The physical location closed in 2008 but continued to operate as a virtual museum. Now it is re-opening its doors in a brand new physical facility in Milwaukee's Bronzeville neighborhood at 401 W. North Ave.  America’s Black Holocaust Museum is dedicated to promoting public awareness of the harmful legacies of slavery and Jim Crow in America and promotes racial repair, reconciliation, and healing. 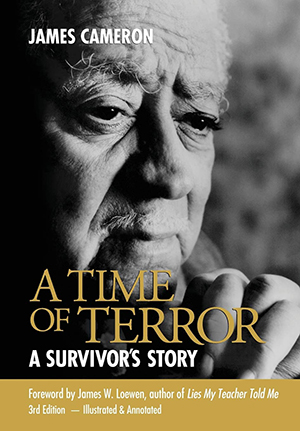 Dr. James Cameron (February 25, 1914 – June 11, 2006) was the only known survivor of a lynching that took place in 1930 in Marion, Indiana. Cameron recounts the harrowing event in which an angry mob lynched his friends Thomas Shipp and Abram Smith in his memoir A Time of Terror: A Survivor’s Story, which he first self-published in 1982. The book was later republished in 1984 by Black Classic Press, and a third revised edition was released in 2016 by the LifeWrites Press.

A self-taught historian and lecturer, Dr. Cameron devoted his life to educating people of all backgrounds about the legacy of slavery in the United States and the continuing injustices faced by Black 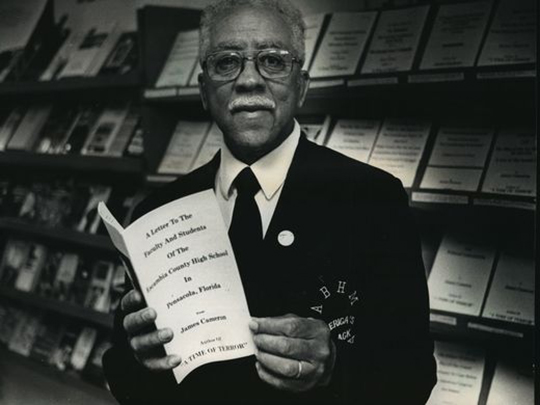 Americans. Dr. Cameron was the quintessential activist-scholar who organized for the National Association for the Advancement of Colored People (NAACP), participated in marches for civil rights, and lectured around the world about Black history.  Throughout his life, Dr. Cameron wrote about the historical roots of many of the issues we still live with today. He authored dozens of booklets that he sold at speaking engagements and at his museum. 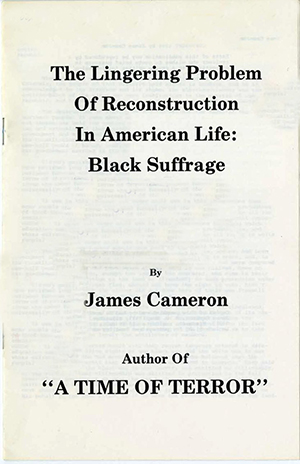 The Dr. James Cameron Pamphlet Collection is made up of thirty-eight self-published pamphlets by civil rights activist Dr. James Cameron. These pamphlets have been digitized and are available online in Milwaukee Public Library’s Digital Collections. The original pamphlets are preserved in the Lucile E. and Richard Krug Rare Books Room located at the Central Library. Dr. James Cameron wrote about overarching topics in American history such as slavery, the Civil War, and Reconstruction.

Dr. Cameron also touched on local issues, such as Police Community Relations Among Blacks in Milwaukee, Wisconsin and An Open Letter to the Milwaukee Fire & Police Commission Regarding the Earnest Lacy Complaint.

Reggie Jackson wrote in the afterword to the 2016 revised edition of Dr. James Cameron’s memoir A Time of Terror: A Survivor’s Story:

“Dr. Cameron’s lifework focused on raising Americans’ consciousness and conscience about the atrocity of lynching. He did this by publicly and tirelessly retelling his personal experience. He believed that hatred was a poison that corrupted the hater from within. He taught, by word and example, how to forgive but never forget.”