Chupacabra Road Trip: In Search of the Elusive Beast by Nick Redfern 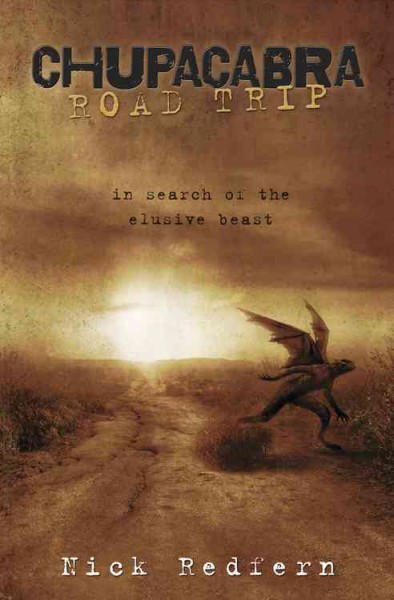 Chupacabra Road Trip: In Search of the Elusive Beast, our latest book from cryptozoologist Nick Redfern, begins with a mysterious sepia-toned cover, good typography with a fitting decorative text, and photos throughout that give us a sense of the locations he visited on this road trip to find this blood-sucking beast.

The book is divided into six parts: The Puerto Rican Monster, The Goat Sucker in the United States and Mexico, Chupacabra Conspiracies, Hunting Vampires, Hoaxes and Misidentification, & Theories and Final Words. Lest you think these headings too broad, beyond what the title promises, Redfern reminds us in the introduction that Chupacabra is Spanish for "goat sucker," named for the mysterious beast's ability to drain goats and other livestock of their blood. In other words, a type of vampire.

If you saw Syfy's episode of Proof Positive where Redfern and his colleague, Jon Downnes, were featured, this give you a behind-the scenes look. Interesting historical facts and anecdotes are interspersed with the road-trip story. For instance, "In ancient Babylonian, Greek, and Persian lore, the peacock was seen as an immortal creature, on whose flesh was rumored never to decay, even after death."

Readers familiar with Redfern will get to know more about his journeys and investigations. Readers interested in Chupacabra stories will learn about the beast in stories from around the world. If you're not already a Redfern fan, I expect you will be before reaching the end of this road trip.