So often in these heritage months, we post and talk about individuals who accomplished monumental tasks, or won amazing prizes and accolades. These stories are absolutely inspiring and important, and indeed tales that are absolutely worth of aspiration, but they are not the only stories we should highlight. So today, we are focusing on Hildegard Chada, who lived to care for her family and her community. A wife of only 24 years of age when the Great Depression set in after the 1929 stock market crash. Moving to Boulder Junction in northern Wisconsin from Green Bay, Hildegard and her husband did not have access to soup kitchens, store-bought food, none of what few reliefs from the depression were available to city dwellers of the time. Even worse, their home was isolated from a water supply, requiring Hildegard to carry water uphill from a lake to make sure the home had water for drinking, cooking, and cleaning. With her husband taking a job that required him to be away for entire seasons at a time, Hildegard was often the sole caretaker of four children, with no neighbors for almost a mile. Survival was her occupation, caring for her children, mending and making clothes, transporting water, and generally just doing everything to get by.

When her children had all grown and took jobs, Hildegard did not slow down one bit. Inspired by the writings of a WWII war correspondent, she took a job as a fire station superintendent. She would walk two miles a day to her fire tower, which then required climbing up an 85 foot ladder, all with an onion sack of her daily supplies over her shoulder. Her days could be especially long during dry seasons, keeping a vigilant watch for possible forest fires. Thankfully not all her days were lonely; as her family would often help keep her company during the later hours. 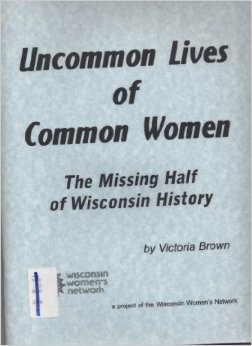 Hildegard was a pioneer in modern times, a testament to the women who dedicate themselves to their family and their community. Her story is just one of the unsung women of Wisconsin documented in Uncommon Lives of Common Women: The Missing Half of Wisconsin History, available at many library locations.